Growing up, my family and I would spend a week once a year vacationing in the White Mountains of New Hampshire. During those trips, we’d typically get beautiful 80-degree days perfect for hiking, boating, swimming or biking, but there was always that one day that would be a wash—literally.

I remember once we had planned to take a train up to the top of a mountain, but because of a forecast of pouring rain, we had to cancel that plan, and instead spent the day indoors shopping and catching a movie at the theater. My mother told me that this was part of traveling—that with every trip, you have to plan for a bad day, so whatever the reason, you’ll have a backup in case something goes wrong. 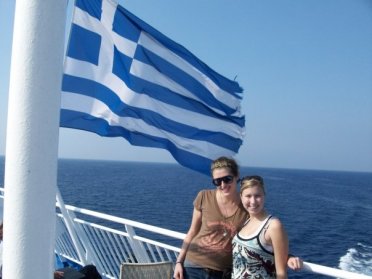 This is what you call a ‘classic’ tourist in Greece photo opp.

When I studied abroad in 2008, I spent a good part of my spare time planning my fall break trip to Greece. That was the first time I had to plan a trip all on my own, from the transportation, to the hotels, to the activities, and I had everything scheduled down to the hour. Day 1: Fly to Athens and spend the afternoon wandering the gardens near the Acropolis. Day 2: Visit the major tourist sites; Eat gyros; Day 3: Nine-hour boat trip to Santorini; Sleep on beach. You get the picture.

In between the basics I had a list of all the things I wanted to see and do, but I forgot one very important fact: things go wrong, and plans change. During that trip my companions and I encountered three transportation strikes—one in Italy where we nearly missed our train to Milan, a second in Athens which shut down public transportation for a day, only to reopen as soon as we landed in Greece, and a third the morning we had to catch our boat to Santorini (in all cases, we nearly missed our ride, but by some miracle were able to have everything work out at the last minute). On the third leg of the trip, a violent storm was expected to blow through the Mediterranean and we were unsure if our high speed boat would take us to Crete (almost all of the boats leaving Santorini that day were docked, but we got lucky—ours was the only boat allowed to leave. The water was incredibly choppy, and I hit another life milestone that day—first time throwing up from sea sickness).

Things could have gone very differently on that trip if we were delayed at any point. In my mind, I had pictured Greece’s weather as sunny and warm every day—I never factored in that rainy day. We got lucky though, we caught every plane, train, bus and boat to get us to where we needed to be, and we managed to see almost everything on our list. We hiked a volcano, drank with strangers who later became friends on a beach and soaked in as much of this beautiful country as we could.

But every trip has its bad day. Our final day on Crete was short—16 hours total, with four spent on a bus, and six spent sleeping. It was disappointing because we had wanted to see the palace at Knossos, the former capital of the Minoan empire and potential home of King Midas, the guy with the golden touch. But poor planning on my part led us to only seeing a small portion of the island before rushing back to the airport to go home.

It was a cloudy morning in Rethymno that day.

We made the best of it though. While I realized my mistake, I kept reminding my companions that this happens—that on every trip there is always one day where things don’t go as planned, and you have to make the best of it (I was repeating what my mother had told me ten years earlier). It’s an essential part of any trip, and it forces you to make something out of a bad situation. It teaches you how to go with the flow.

For all the travelers out there, there’s three ways you could approach this type of scenario. For all of my Type-A, obsessive planning types (you are not alone, this is how I describe myself most days), I would recommend before your trip researching alternative options you can do on a rainy day. That way, in the case something changes your plans, you can rearrange your schedule to make sure you still get to see the important stuff. Option 2 is to just wing it—if something goes wrong, don’t fret, instead, talk to your hotel concierge and ask about what you can see or do in the area. Usually they’ll steer you towards something you never would have expected, and you’ll head home with a story that is truly and uniquely yours. Option 3, which I’ve done a few times, is to say screw it and just stick to your original plan. If the site is open, you can still go, even if you get a little wet. As long as you don’t let a bad moment ruin your day, you’ll still get to enjoy your trip.

I will also stress that for the planners like me out there, prioritize what sites you want to see most. Unfortunately, there’s never enough time to do everything, so when I travel, I make a list of everything, and star the places that are top on my list. I feel that it’s better to devote as much time as you see fit towards the things you want to do, instead of trying to squeeze the most things into one trip. Plus, if you have to skip something because of time, it gives you an excuse to go back.

Our last day in Greece was spent in Rethymno, a city two hours from the capital of Crete. We arrived at our hostel around dinner time, and had enough time to shower and grab food and a drink before we had to go to bed. That night, we met travelers from all over the world, backpackers who would stay in the town for a day or two to freshen up before heading back out into the island’s backcountry. It was a hiker’s paradise, and I still regularly fantasize about how I want to return to Crete and hike and for a week (see, there’s always a reason to go back again). We woke with the sun the next morning, and got donuts and wandered the street just so we could get a taste of the town we settled in for one night. The trip was short, but it was worth every minute there.

And even though we weren’t able to see everything we wanted to see, that blip of a day still sits strong in my mind—Greece was my first time planning a trip, and it was my first time making a travel mistake. It taught me to adapt to changes and to go with the flow while traveling, because sometimes the things you don’t plan for are the most memorable. 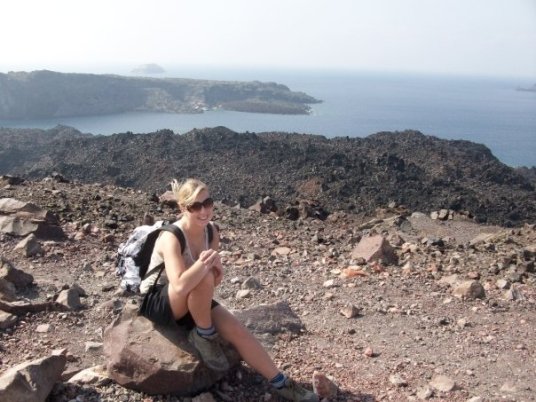 Remember: With every bad day, you get five great ones–our hike through Santorini’s volcano crater was a highlight of the trip.

Clarity is a series of personal essays or vignettes about my travels and the lessons I learn while there. You can read more pieces of Clarity here.