There’s a lot more to France than just Paris (but don’t be fooled, I love Paris and could easily spend a week there exploring and still miss things). When given a limited amount of time, I recommend splitting your trip into two parts—Paris, and to one of the other regions of France. Where to go exactly, is up to you—if you’re looking for classic French countryside filled with beautiful castles, head to the Loire Valley. If it’s swanky beaches and ornate hotels, go to the Riviera. And for the history buffs, head north to one of my favorite regions: Normandy.

Some travelers may prefer to rent a car to hop from town to town (benefits of this include not having to lug your bags around with you when you make stops, and you have the ease of traveling on your time without worrying about train or tour itineraries), it’s actually more economic for solo travelers to go by public transportation. Train travel across France is easy and provides you with an opportunity to enjoy the scenery and take a rest between towns without worrying over navigation or high rental costs. 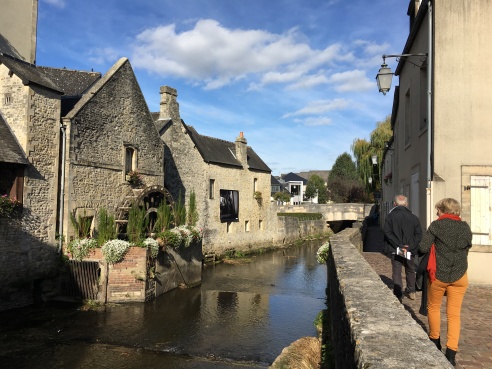 Urban hiking is a great way to explore Bayeux.

By train, it takes under three hours to travel from Paris to Bayeux, a small village right off the coast and starting point for many D-Day history tours. I recommend booking your hotel here (or, alternately, in Caen if you are eager to see the D-Day Museum), and using this as a base while you explore. The village’s town center offers charming streets to wander with shops and restaurants, and be sure to set aside some time to wander the cathedral and visit Bayeux’s famed tapestry, which tells the story of the Norman conquest against William, Duke of Normandy and the battle of Hastings.

PIT STOP: The route between Paris and Normandy has plenty of worthy stops along the way—research will help determine your exact route, but I recommend stopping in Rouenfor a few hours. Here, you can visit the Church of St. Joan of Arc (yes, that Joan of Arc), a modern tribute to the saint. The city has three other cathedrals worth visiting, as well as medieval timber-framed houses dating back to the middle ages.

The crater fields of Ponte Du Hoc are remnants from bombings on D-Day.

Using Bayeux as a base, there are plenty of half-day and full-day tour options (I recommend using Bayeux Shuttle, which picks you up right in the center of town and has knowledgeable tour guides that really make the experience special) to visit the beaches and historical points of D-Day. On June 6, 1944, Allied troops stormed the beaches of Normandy as part of Operation Overlord, with the goal to liberate then-occupied France. This aggressive attack paved the way for the eventual victory against the Nazis in. 1945, but came at steep cost of life. While today, most of the sites of these violent battles have returned to a state of leisure and relaxation, memorials scattered heavily throughout the region remind us of the sacrifice of soldiers on D-Day.

When visiting Normandy, whether you decide to rent a car and tour the region on your own, or if you opt for a tour, you should be sure to stop at the following:

Bayeux can also serve as a starting point for tour busses heading to Mont Saint Michel. This rocky island was once only accessible during low tide, when the mud flats were exposed enough for travelers to walk to it. Atop the island is a Romanesque-style abbey and church, towering over the spiral streets of the small town. This was once a place of pilgrimage, but now serves as a popular tourist destination, with a similar feature of plenty of tacky trinkets available for purchase in the gift shops (pilgrims would purchase small icons an prayer beads, while today you can buy t-shirts, salt shakers, cookie tins, and more). If possible, try to spend the night on the Mont, but if time is tight, a day is all you need to explore. And be sure to make time for some galettes at La Mere Poulard before heading back to your hotel.